The power of attorney or POA is one of the most forceful legal instruments in the US, benefitting its citizens across all its states. Just like other Illinois residents, you too can utilize Illinois power of attorney forms to create documents that meet your varying needs. It’s also worth noting that these forms’ completion varies slightly across states.

However, their essential purpose remains the same because they allow one party to permit a trusted ally to make significant decisions in their name. Under this arrangement, one party grants another the authority to make critical decisions in their name and on their behalf. The permission giver is the principal, donor, or grantor, while the appointed decision-maker is an agent or attorney-in-fact.

This legal capacity lets an agent decide on their grantor’s critical areas of life when they can’t do so. For example, they can decide matters affecting their principal’s health, business, and family members. A power of attorney form in Illinois allows an agent to handle sensitive decisions that cover areas like parental duties. It also grants them guardianship and the right to handle an incapacitated principal’s business matters. In Illinois, an agent has so much power that they can even sell or pledge their principal’s property without their consent or notifying them. 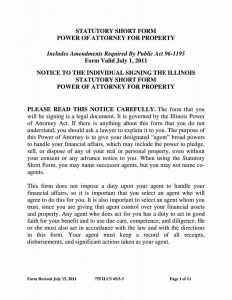 Moreover, the Illinois’ Power of Attorney Act has more to say about this kind of stewardship. Below are just a few of its provisions.

Reasons to Use a POA Form in Illinois

So, why should you use this vital form in Illinois? For many reasons. First, people age and lose their ability to make sound financial and other forms of decisions. Thus, they require the help of a trusted person to transact for them. Some senior citizens may have dementia or senility, prompting external help with legally binding decisions.

Other people may need power of attorney due to prolonged poor health. During such weakened moments, they still need to keep their lives moving and make critical decisions. The power of attorney forms come in handy during such times. For instance, they let affected persons sell or buy property and pay their bills.

The healthy and young can also benefit from the power of attorney forms. For example, busy business owners can delegate their powers to pay workers and suppliers. However, they should specify their agents’ limits. Like in our example, they must state clearly if their agents can terminate employees or change suppliers. Otherwise, abuse of power and office can result from the hazy and loose-ended delegation.

So, whether you are sick, healthy, or young and vibrant, it’s always wise to prepare for the unknown. You can benefit from these forms and delegate the performance of various critical tasks to an agent. Below are some of the common types of power of attorney you can benefit from.

This type of POA is an “advanced edition” of the general one since it extends its limitations. The difference here arises in that the agent can continue with their stewardship even after their principal’s incapacitation or death.

This type of POA authorizes an agent to make decisions on matters relating to their principal’s health. It applies in cases where the principals are mentally sick or senile. It also benefits Illinois workers engaged in life-threatening jobs like logging or commercial fishing.

This version of a power of attorney has limited scope to everything the principal grants their agent. Mostly, agents are authorized to deal with financial and medical matters. However, they can’t do anything else outside their defined scope. For example, an agent authorized to deal with health matters can’t sell or pledge their principal’s property. Their authority to act ends with their grantor’s death.

This type of POA gives a principal’s agent the power to deal with every document connected to their principal’s vehicle registration and titles.

The laws of Illinois allow for the tax power of attorney. The Form IL-2848 serves this need. Under this arrangement, qualified accountants handle all their grantors’ tax matters. For example, the law allows them to prepare and submit taxes on principals’ behalf.

Other Illinois Forms By Type

Other Power of Attorney Forms By State