A power of attorney is a legal document allowing one person (a Principal) to grant powers to sign documents or make essential decisions on their behalf to another person (an Agent). Using our free power of attorney form on this website, you can avoid spending lots of money on a lawyer. All you need to do is to follow the simple instructions in the form and fill it out for signing. Besides that, you can take advantage of the step-by-step online POA builder to fill out and customize the form to your needs. 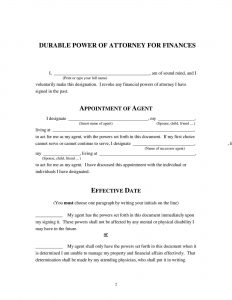 Why Do I Need a POA?

A power of attorney is a legal document giving the right to someone you trust to make critical decisions on your behalf. Such decisions may relate to managing your finance, selling or buying property, or deciding whether you should be provided life-sustaining treatment if you are badly injured and become incapacitated.

It is also reasonable to set a POA for those who leave the United States. For instance, the military personnel or people relocating to another state for an extended period may utilize it. In such cases, the agent can produce vital decisions and activities with the principal’s property while the latter is away.

Many people compose a power of attorney to secure their property, assets, and personal wellbeing in case of unexpected mental or physical incapacity. In such cases, the agent receives a fixed set of instructions to manage the principal’s property and make decisions affecting their well-being and care.

To date, you can set four main types of power of attorney in the USA: general (financial), limited (special), durable, and medical. Each type presupposes a specific set of duties you can entrust to your chosen agent.

Such a power of attorney document presupposes the agent’s power in a very limited scope of activities, mostly completed for one or several specific purposes. For instance, the limited POA can enable an agent to sign documents instead of the principal during their absence in the city or country or sign business documents for one month.

When composing a durable power of attorney, the principal prolongs its effect even after their incapacitation (not death). In this way, a durable POA is similar to a general one except for remaining valid upon the principal’s loss of capacity.

A medical power of attorney gives agents the power to make end-of-life care decisions for the principal if the latter is suffering severe injury or mental incapacitation. These decisions can relate to the hospice care selection, life-sustaining treatment, medications, and life-supporting procedures assigned to patients in such conditions.

Besides these four power of attorney types, one should keep in mind the option to compose a springing POA (also called “conditional”). This legal document doesn’t presuppose any powers for the agent permanently, authorizing them to act only under specific circumstances once they arise. As its other name, conditional power of attorney, suggests, a specific condition should be met for this document to come into force. Examples of such conditions include the principal’s disability or physical or mental incompetence to make independent decisions.

A power of attorney is part and parcel of the estate planning process. However, many other documents performing similar functions are also included in the estate planning documentation package. Here is a brief account of the distinctions between the most typically confused POA types and related documents.

A health care proxy is a person assigned by the principal to make healthcare-related decisions for them. However, the medical power of attorney is the person who has the authority to allocate your finances for the treatment. Thus, if a medical POA and a health care proxy are two different persons, problems may arise as a result of the former’s unwillingness to pay for the treatment a proxy chooses as the most reasonable.

Power of Attorney vs. Personal Representative

A personal representative assumes the responsibility for property management after a principal dies while a power of attorney is the one to manage the estate and financial affairs of the principal while the latter is alive (even if incapacitated).

How to Create a Power of Attorney (General Steps)

Before setting a power of attorney to grant other people the right to perform vital financial decisions on your behalf, you should take a couple of steps to arrange everything correctly.

Since several power of attorney types are currently available in the United States, you need to determine the one you need first. If you need a friend or relative to conduct some property sale/purchase while you are away, a general power of attorney document will suffice. Suppose you’re a military officer with health risks. In that case, it’s better to set a durable power of attorney for the agent to continue performing activities on your behalf if you become incapacitated. If your major hassle is end-of-life care, then a medical power of attorney should be your choice.

After you clarify the needs for the power of attorney arrangements, it’s time to select an agent to entrust with such a responsible task. Be sure to choose someone you know well, a person whom you can trust, and in whose sobriety and wisdom you can be confident. Talk to the agent first to check whether they agree to assume such a role. Once all arrangements are made, it’s time to proceed to documentation.

Lay out all the delegated authority that you entrust to the agent in the power of attorney form. Double-check all points to ensure that the duties and rights are not described too broadly. This will help you avoid the abuse of power by the agent you appoint, giving you confidence in the scope of delegated duties.

Once the form is filled out with all personal details of the principal and the agent and the delegated powers, the power of attorney document can be signed. This step should be performed in front of a notary public to ensure that the principal provided specific rights to the agent voluntarily. Besides, the notary checks the principal’s identity to prevent fraud.

How to Fill Out a Power of Attorney Form

Now let’s proceed to the specifics of filling out the power of attorney form. Follow these steps to complete the document correctly, thus avoiding any confusion or ambiguity regarding its legal force.

The first step is to indicate your name in the header of the document, which usually reads as “General (or another type) power of attorney of ______.” Then goes the introductory paragraph with standard wording, requiring you to indicate your name again, to give your address, city, and state, as well as the attorney-in-fact’s name, address, city, and state. By completing this part of the document, you also verify that the form was filled out in your name, in your stead, and for your benefit. Any new power of attorney document automatically revokes the authority given to a previous agent.

Then follows a standard list of powers than a specific power of attorney document can provide to an agent, including the power to make payments or collect financial debts, the right to acquire, lease, or sell personal property, the right to manage real property, management and banking powers, tax powers, and the right to manage the principal’s motor vehicles. The principal can also indicate whether they allow the agent to access their safe-deposit boxes, make gifts and grants on their behalf, and involve in lending or borrowing operations at their discretion.

Entry into contracts, acting as the principal’s personal representative under HIPAA terms, making healthcare-related decisions, as well as the power to sue third parties failing to act in line with this document are also included in the list of powers. The Powers section also has an “Other” section at the end, allowing the principal to give additional instructions.

The following section of a power of attorney document requires the principal to indicate under the laws of which state the document will take effect. In other words, this part specifies the jurisdiction in which the functions of attorney-in-fact will be executed.

This section allows the principal to set particular time frames during which the agent can make decisions on their behalf. This section includes both the date of the document’s coming into effect and its expiration, as well as additional terms (the principal’s right to revoke the document or their incapacitation).

As a final step, the power of attorney document should be signed by the principal and the agent, with the print name indicated under the signature. The document should also be dated notarized to take force.

On our website, you can find all power of attorney templates and use them depending on the legal document you need. We also provide a blank power of attorney form that can be downloaded from the website and printed out for manual filling.

Though a power of attorney can help the principal simplify many aspects of their lives such as sale and purchase of property, management of financial matters, guardianship over children, etc., a broad formulation of powers can lead to the abuse of the agent’s authority. The problem arises from the fact that POA arrangements are regulated by contract, not by law. Thus, in some cases, agents may make decisions and sign documents that the principal did not initially intend them to do, causing much chaos in the principal’s estate.

To avoid the risk, the principal should formulate the agent’s authorities very precisely, giving the latter the power to do only the activities that the principal intended them to. Setting proper limitations for the agent’s scope of authority is a wise step to ensure that the delegated activities are performed without abuse or misuse of the given power.

Here is a list of the most frequently asked questions about the power of attorney document.

How can I revoke a power of attorney?

Yes, you can do this at any point in time. To do so, you can either revoke the previous document and issue a new one by assigning another agent. If you don’t want to assign a new agent, then a revocation document should be completed and signed in the presence of a notary public. Some states also require sending an official notification of the POA revocation to the agents.

Can my agent relinquish their power?

An agent you assign in your power of attorney document can refuse from assuming those responsibilities. However, once accepting them, the agent cannot pass those duties to another person. Only the principal can revoke a power of attorney for one person and assign another one as their agent.

How much will I have to pay for a POA?

If you turn to a professional lawyer to complete a POA, it may cost you somewhere around $200 for a single person.

Can someone in prison create a POA?

Yes, prisoners also have the right to complete a power of attorney to let their friend or relative manage their finances and property during their incarceration. If they have underaged children, they may complete a child POA to assign a guardian to them for the period of their jail sentence.

Do I have to notarize a power of attorney?

Yes, a power of attorney document needs to be notarized, with the notary’s role presupposing the affirmation of the principal’s presence of their free will. Besides, the notary should confirm that the principal laid out all the terms independently and signed the document voluntarily. In most cases, only the principal’s presence is required for the legal document to take effect upon notarization. A copy of the notarized power of attorney can be given to the assigned agent later.